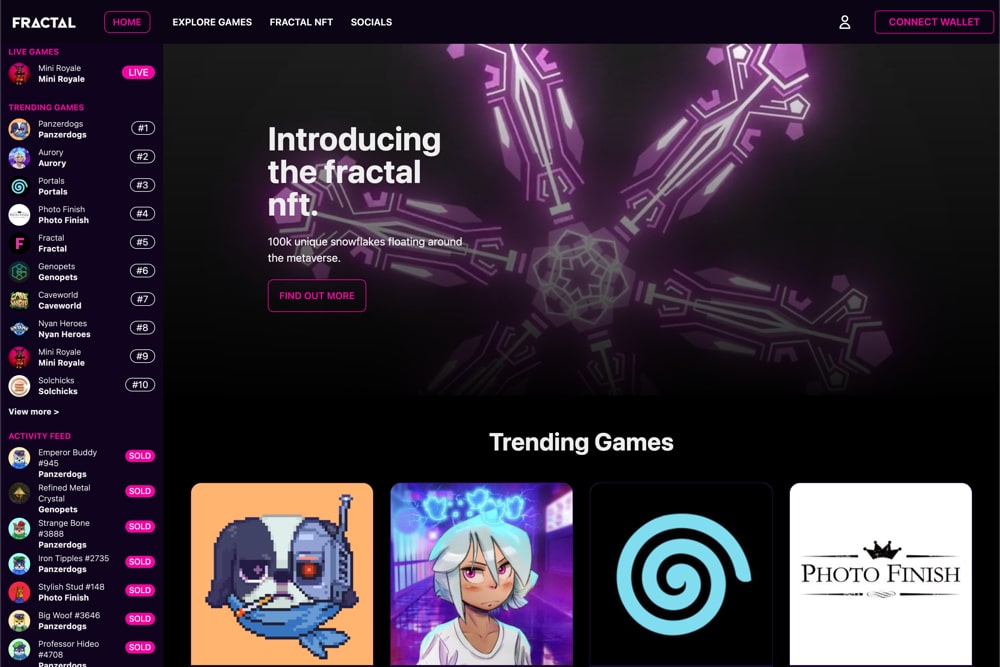 NFTs growth continues and shows no signs of slowing down– if anything, the announcement of Metaverse and the like have only accelerated it.

However, with the “real deal” at least half a decade away, settling yourself in an inherently speculative market is tricky at the outset, let alone picking the winner.

Prior to its launch, Fractal’s discord got hacked via a webhook and the users’ wallets got drained.

That said, Fractal seems to have a solid operation with all of the necessary infrastructure and insight.

In response to games designed to use NFT assets, marketplaces continue to spring up to meet the growing demand for better, more sophisticated services. While Fractal doesn’t offer the most number of games, they’re actively identifying which games have sticky enough assets to warrant adding to the roster.

With Solana cratering transaction costs, Fractal also has the advantage of being traded with one of the fastest-growing coins on the market. Beyond that, this integration allows Fractal to take advantage of the various blockchain infrastructural benefits that coin offers.

This is just icing at this point, but it’s still nice that Fractal has some serious players in the industry backing it up. Justin Kan, one of the co-founders of Twitch, recognizes not just the value for vanity but sees the future of online interaction and understands where the trends are likely to lead.

Mike Angell and Robin Chan provide the starting capital for what is otherwise a slim operation. David Wurtz rounds it off by providing key insights into the various brands in the market and the associated movement so Fractal can respond quickly to rapid shifts (like adding an asset that might not already be on the database but suddenly explodes).

At the moment, Fractal facilitates NFT markets for 10 different games, including their own, and none of the biggest players are included. It’s unclear whether this arrangement is so Fractal can promote its own NFTs over other already more well-established IPs, but you’d hope they eventually open it up a bit more.

That said, Fractal gamified its NFTs at a meta level, providing not only “in-game” value but a larger, structural system that can transition easily when the software infrastructure is available. The division of the assets into factions with varying power levels and attributes that can be utilized in games provides a wide variety of utility options.

There’s no getting around the fact that it’d be nice to see more games trading on the market at the opening, but there’s also something to be said for not watering down the service by adding every player in the game. Going with Solana and restricting the initial pool of games helps ensure a stronger, longer-lasting market.

When you consider some of the minds behind Fractal, one might suspect a method to the madness– as well as a detailed roadmap. While there’s no guarantee that Fractal will be on top when digital “shops” actually become a reality, they have all the hallmarks of something worth keeping an eye on if not dipping a toe in.