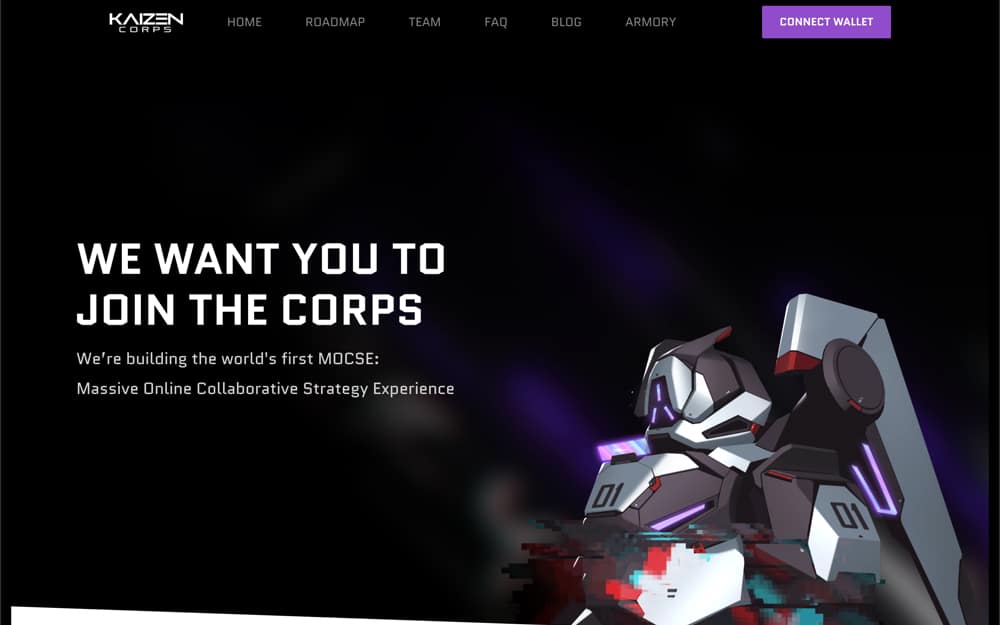 Despite steady growth in the market as a whole, NFTs are fairly volatile assets with the potential for massive returns– if you know where to look. Of course, that’s the part that gets everyone and no source (even this article) can provide a guaranteed bet on which assets will appreciate and which will languish.

Thankfully, we all know some of the signs to look out for, and Kaizen Corps presents many of them.

Though it’s sure to get a bit messy (and eventually oversaturated), NFTs games are a solid option for active short-term speculation. The fact that many of them open as play to earn games where you don’t have to spend money to start playing and earn potentially valuable NFTs to use or trade.

Of course, it’s pretty much universal that the companies in question note that the P2E function is only temporary and is being used to develop a strong user base. What determines whether or not a given NFT game can whether the oncoming deluge likely depends on how effective the company is at:

While it’s a bit early to tell if Kaizen Corps can achieve the second option, their game Domination follows a tried and true method with some unique twists. While most people will call it a “Risk-clone” (and there are some similarities), it looks as if the game, even in its finished state, will resemble a lesser-known game– and the one that loosely inspired Risk: Diplomacy.

That said, the basic structure of diplomacy is then overlaid with some of the score-keeping mechanics common to popular card games like Magic the Gathering or Hearthstone. Regardless, the combination of fairly simple and straightforward rules with a strategic game often yields some of the longer-lasting games (see: Risk).

This bodes well for Kaizen Corps as the value of the assets in-game will potentially bolster their value outside of the game, allowing them to weather any choppy waters. With regards to the community, the numbers aren’t necessarily overwhelming, but the ratio of users to engagement is promising.

With around 15k users (at the time of this writing) and an engagement above 12 ½%, the Kaizen Corps game has a decent chance at developing the community. If Kaizen Corps can accomplish this, there’s a good chance that it’ll not only weather any storm but rise to the top of the hill in the process.

While there’s no real way to tell when or how cultural lightning will strike, there are a couple of things companies can do to make it more likely. One of the more effective measures companies can do to help develop a community is to maintain a consistent and transparent line of communication with the user base.

Kaizen Corps has done so up to this point, even being honest about infrastructural hiccups and refunding money/coins just to maintain a favorable reputation. Assuming Kaizen Corps doesn’t do a Google “Don’t Be Evil” bamboozle, respecting the user and taking their lumps like a responsible person should help Kaizen Corps foster a robust and passionate user base.

Because of network failures, Kaizen Corps had a rough opening and even refunded 0.33 SOL to holders that purchased assets at the initial 1.33 SOL instead of the community-voted 1 SOL. Granted, it’s easy to argue that the DAO performed as designed, but it also suggests some instability with early adopters.

There was also a bit of a hiccup with actual minting since the market fell out from under Kaizen Corp weeks before the mint (prompting the initial offering price decrease). Thankfully, the dev team responded quickly and appropriately (albeit a bit flippantly) to the community which is a net gain in the long run.

Unfortunately, the team members created persona contacts for the project, so the specific individuals are still a little bit unknown outside of a few months ago. That said, the Kaizen Corp team is fairly active with the community– even if most of the time it’s still just a boilerplate response.

In terms of the future, Kaizen Corps plans further development and refinement of the DAO, though that’s definitely a part of the infrastructure you’d prefer more finished than not… Still, the overwhelming majority of the roadmap involves the development and integration of the game Domination– you know, the part that’s most likely to make it a success.

Right, so how does it actually perform? Well, one good note is that Kaizen Corps is backed by Solana which is good for both the general market reasons as well as those specific to the game. Specifically, Domination is the kind of game where it’s that difficult to see the players themselves inflate the trading volume and, to a larger extent than most NFT games, define the value.

Granted, all NFT games will see the players define the value a bit, but given how intrinsically sophisticated the game is (regardless of how simple the rulesets), it’s not hard to see how player demand for particular assets for their use-value could come to overshadow the sign value more commonly associated with NFTs.

That said, the big early adopters like Axie Infinity are unlikely to be dethroned, but the inherent structure of the market suggests benefits for both players and investors. The devs even made sure that investors wouldn’t negatively impact the game by allowing you to transfer your role in the game to someone else.

In terms of actual value, now’s still a good time to get in on Kaizen Corp NFTs as they aren’t yet that expensive, averaging around 0.47-ish SOL with a floor of 0.37 SOL. On top of that, the developers are still working on the game Domination, so some of the NFTs will explode in use-value when the game finishes production.

With a present ceiling of only 2.2 SOL, this is definitely an asset that can rapidly appreciate in value over the next couple of months depending on how well the team engages their community with the game.

Because of their early missteps, it’s easy to look at Kaizen Corps as flopping out of the gates, but as an early adopter of NFT games for the strategy genre, it could define an entire niche. It also doesn’t hurt that Kaizen Corp assets aren’t that expensive because of its somewhat floundered opening.

Finally, the regular and relatively open communication with the devs and active Discord server allow Kaizen Corp to develop the coveted “community” for their game. All in all, it looks like Kaizen Corp is a good option for speculators and gamers alike, though it may be a quarter or longer before you start to see real results.