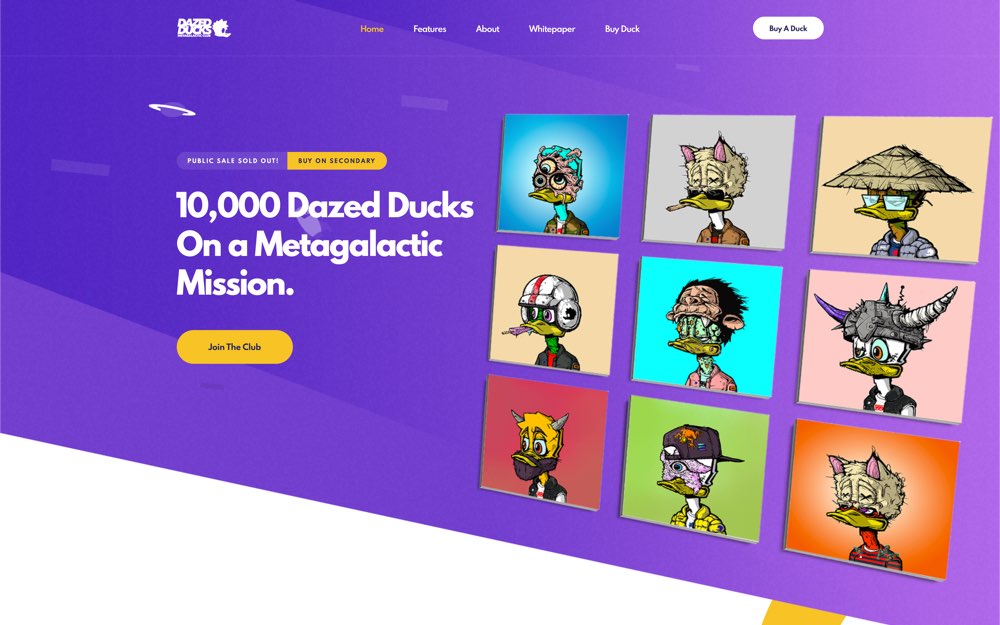 Many NFT creators are thinking of new ways to make their projects stand out.

DazedDucks Metagalactic Club is a promising new NFT project that stands out for its art and excellent reward system.

If there is a single project that can convince Ethereum fans to come over, it’s DazedDucks.

There are only 10,000 ducks and holders get to help the project succeed by submitting ideas and voting on various aspects of the project.

What is DazedDucks Metagalactic Club?

DazedDucks Metagalactic Club is a narrative-based NFT collection released on the Solana blockchain.

This NFT project tells the story of a “dazed duck” that forms a club on his moon base.

The ducks have to avoid other interstellar animal tribes and poachers to survive.

There are 10,000 ducks total, each of which features a combination of unique attributes.

25 of the 10,000 ducks are entirely hand-drawn and are considered legendary.

80% of the earnings from the NFTs will be deposited in the “Duck Fund.”

The Duck Fund will be used to pay salaries for the team, donate to charity, and fund future business ventures.

A staggering 80% of all profits from secondary NFT sales and future business ventures are sent to holders on a weekly basis.

Additionally, holders can propose ideas to benefit the project and vote on ideas from others.

If the idea receives enough votes, the team will try to make it happen.

The DazedDucks team introduced themselves to the world on Vibz FM. The team consists of Shaun, Sash, Zack, and GuavaDeArt.

Shaun, the project’s CFO and project manager, has a background in starting and flipping online businesses.

Zack, who has aided many large brands with digital marketing campaigns, is the project’s chief marketing officer.

The talented GuavaDeArt created the art behind the project.

Guava’s art is popular in the United States as well as the United Kingdom, Japan, and Canada.

The DazedDucks team has already designed all 10,000 ducks, created a website and began minting and selling their NFTs.

The first round of NFT-holder rewards will be paid out in Q1 of 2022.

Soon, the team will release a member dashboard that tracks and displays all project revenue.

Holders will be able to use the dashboard to see their weekly rewards and claim them at the click of a button.

The dashboard will also be used for submitting ideas and voting on future business ventures.

To reduce the impact of project whales, each holder will get one vote per idea, regardless of how many ducks they own.

The team already has other business ventures planned for 2022.

The team’s P2E games business will be revealed in Q2 and launched officially in Q3 or Q4.

The team is also launching an ad-based business venture in Q4 of 2022.