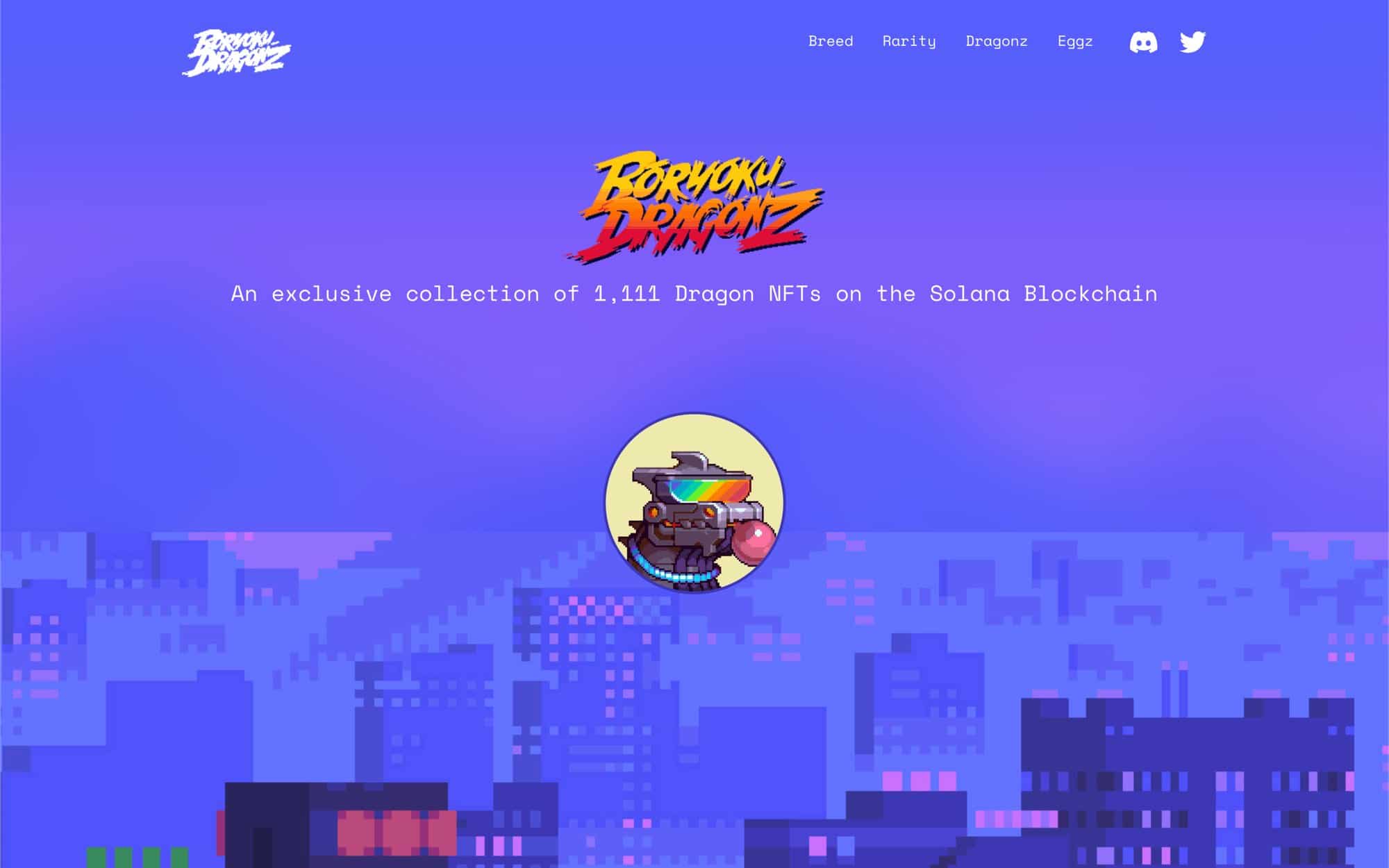 The year is 4269, and the Bōryoku Dragonz are the survivors of a post-apocalyptic world, relying on a green brew called BOKU to live.

Such is the lore of the Bōryoku Dragonz NFT on Solana Blockchain.

The unique project aims to bring a “fresh design” to Solana with daily token drops and a token-burning breeding game.

In this overview, we’ll cover the latest on the project’s background, tokenomics, roadmap, and more.

Bōryoku Dragonz is an exclusive collection of 1,111 NFTs. Of the total supply, the project set aside 101 NFTs for its team and 10 Legendary Dragonz for auction.

Each NFT is a quality pixelated image designed by artists Dmitry Dudko and Pixeldoshi.

You can buy Dragonz on the DigitalEyes and Magic Eden marketplaces.

Currently, the floor price of the original NFT on Magic Eden is 173.00 SOL.

Next, let’s look at BOKU, the project’s token.

BOKU and the Project’s Tokenomics

“Brewed fresh daily,” 67% of the $BOKUBREW supply goes to Genesis Dragonz owners at a rate of seven tokens per day.

The more dragons you own, the more tokens you receive.

The project also allocated 10% to the 5,000 Baby Dragonz owners, 10% to reserves, and 13% to Liquidity Provider Incentives.

So why would you want to own $BOKUBREW tokens? Besides playing a key role in the lore, it has two utilities.

First, the $BOKUBREW token is useful for community dynamics.

You can use the BOKU token for rank upgrades on Discord, where the community is active with “Dragonz Masterz” and “Dragonz Tamerz” moderators.

Second, you can use your $BOKUBREW for breeding.

In the first month, you need 840 BOKU tokens to breed an Egg or Baby and 350 to Fast Hatch.

Over the next three years, a monthly 5% inflation rate is added.

According to the project’s Twitter, it sold out in under three minutes.

Bōryoku Dragonz then hosted a Legendary Dragonz auction which fetched a high of 1,111 SOL for one Legendary.

Now, the community is buzzing, and as of January 4th, 180 Baby Dragonz hatched.

Soon, the project plans to launch a gated community.

Conveniently, the website has a rarity checker for all Dragonz and their traits, including:

For example, a Dragon with a flame mouth is the rarest mouth trait, seen among 2.63% Dragonz. Recently, Rarity Sniper also added the project to their site.

For more information on the Bōryoku Dragonz NFT collection, visit their website here.